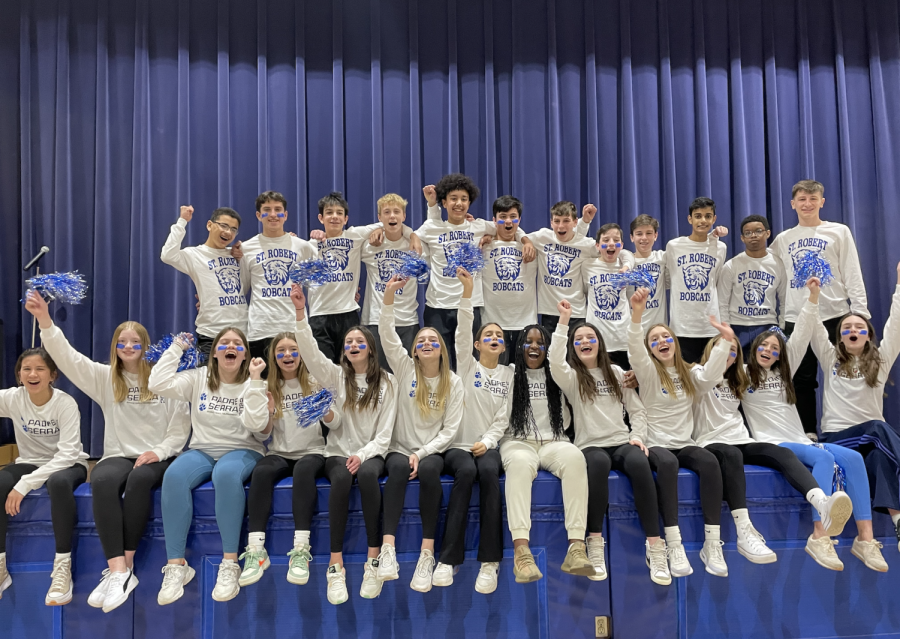 Every year the 8th grade basketball teams in the Archdiocese of Milwaukee compete in a tournament, which places the best teams against each other in order to crown one overall champion. The top boys and girls teams duke it out for glory in a high level of competition during the tournament. This year, both the boys and girls teams from St. Robert qualified for the tournament. Not only that, but the boys team made it in as a #1 seed.

The tournament format is akin to March Madness, where there are four brackets each with their own seeding. That means that the boys team was ranked as one of the top four teams in the tournament. Their team even earned a “bye” in the first round of the tournament, meaning that they did not have to play anyone to make it into the second round of competition. There was a lot of anticipation looking at the possible outcome that could be their victory.

When asked about how the team felt going into the tournament 8th grader Tariqsaid, “To be honest I thought we were going to go pretty far, and that we were going to be a really good team after finally getting Geoffrey back, and all the hard work we’d put in would lead us to at least the semifinals.” Their team being a #1 seed in the tournament seemed to boost their confidence going into the competition.

One of the main reasons that the team did so well throughout the season came from the impact of one player in particular: Jake. Jake transferred to St. Robert at the end of the first trimester. Little did many know, he is an outstanding basketball player. He immediately added value to the team as soon as he stepped into the gym. When he got the ball, other teams were in danger. The team started to look like a true contender after Jake’s arrival.

Despite their great success, the team found difficulty during their first game of the tournament. Tariq also explained how he felt going into halftime against the first team they played, which was St. Mary-Menomonee Falls. Tariq said, “During the game I was a little uncomfortable, and I thought at halftime what would happen if we lost.”  He also felt that they did not do a great job on prioritizing minutes for key players. Tariq said, “[the coaches] looked nervous, and started players…who hadn’t played basketball in a week, and players…who had less experience and hadn’t been all too consistent.” St. Robert played hard, but fell to St. Mary-Menonomnee Falls with a final score of 40-46.

The team worked hard all throughout the season to make it to their #1 seed, but they ended up falling short in their first game of the Padre Serra Tournament. When asked about the team’s performance Tariq also explained how the team played poorly: “It was a very poor performance. Guys were hanging their heads. Body language was off, and no one really stepped up when they could’ve.” That combination of elements ultimately lead to defeat. The season was over for the 8th grade boys St. Robert Bobcats.

On the other hand, the girls team had a different story. Their team finished the regular season with a record of 4 wins and 8 losses. However, they were excited to be included in the Padre Serra Tournament. They were the lowest seed in the tournament, which meant they were going to go up against a tough opponent in the first round. Their team did show signs of confidence before their first game. One player, Ava, said, “We had confidence that if we played smart, and we played hard, we would have a chance at winning.” These words show signs of good mentality, which could possibly mean the girl’s team could overcome all odds and do well.

When asked about the team’s chemistry on the court Ava said, “since we have all been playing basketball with each other for about 3 years we are all very comfortable and trusting each other on the court. We also know how to pick each other up when we’re down, which I also think contributes to us having good chemistry.” Some signs showed promise in this underrated team. However, the girls team lost to St. Mary-Menomonee Falls with a final score of 8-46.

In conclusion, both the boys and girls teams fought hard to the end. They tried their best, but in the end they suffered defeat. Hopefully, next year the teams will shine again for a chance at glory. Go Bobcats!